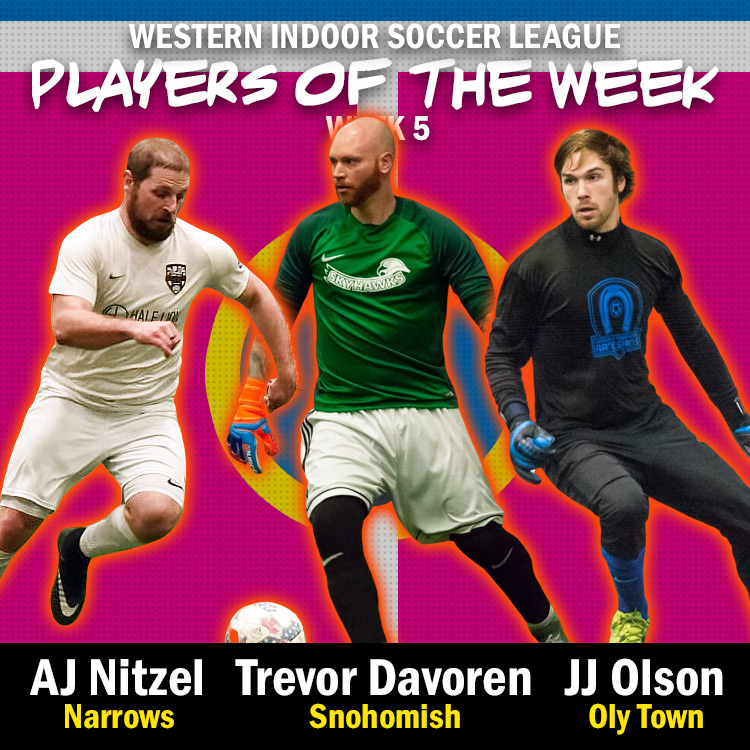 Offensive:
AJ Nitzel – Tacoma Narrows: It was a struggle offensively for Tacoma Narrows in the first half, but they righted the ship in week five with a 10-4 victory over the Oly-Pen Force thanks to AJ Nitzel’s first WISL hat trick and three assists. The three goal game gave Nitzel seven this season, tied for fourth in the WISL and got Narrows their first win and bumped them up to fifth place heading into the second half. The Renton native has already topped his total of four goals last season. This is Nitzel’s first Offensive Player Of The Week Award

Defensive:
Trevor Davoren – Snohomish Skyhawks: On night where Snohomish Skyhawks and Oly Town Artesians nearly upset Bellingham and the Stars Reserves respecitively, the league couldn’t decide which goalkeeper from those two clubs should get the honor. Snohomish’s Trevor Davoren rallied from a three goal first quarter for Bellingham and allowed just three goals over the final three quarters to keep the game close, making 15 saves in their 6-5 loss. This is Davoren’s second Defensive Player Of The Week Award and he was also named second team All-WISL last season.

JJ Olson – Oly Town Artesians: Like Davoren, JJ Olson allowed just three goals over the final three quarters in a 6-5 loss. The Saint Martin’s alum started the game but took a shot to the face about five minutes into the game and had to leave to get checked out. The Stars Reserves took advantage and built a 3-1 lead while Olson was out, but the Artesians outscored Tacoma 5-3 after his return at the beginning of the second quarter. Olson made many saves on the night and kept Oly close to a big upset. This is Olson’s third career Defensive Player Of The Week Award after having won one in each of the last two seasons.