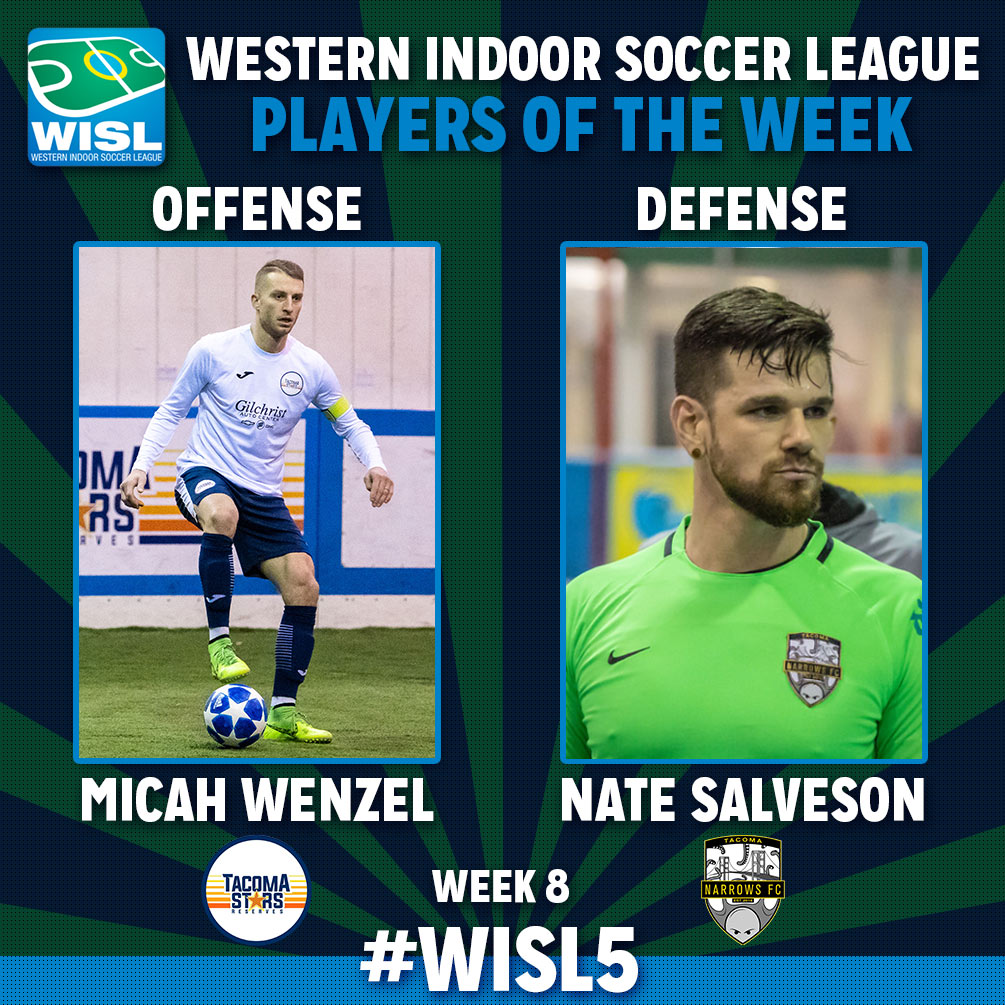 It was a good night for the Tacoma squads knocking off Oly-Pen and Oly Town 18-5 combined. It was a particularly good night for Tacoma Stars Reserves captain Micah Wenzel and Tacoma Narrows FC goalkeeper Nate Salveson, and for their efforts, they have been voted Western Indoor Soccer League Offensive and Defensive Players Of The Week by club coaches and operators.

Tacoma Narrows FC goalkeeper Nate Salveson posted just the second clean sheet in WISL history with his 19 save performance in an 8-0 win over his former squad. Salveson also chipped in an assist and frustrated the Oly Town Artesians early with numerous saves when the Artesians looked to be running on all cylinders. The Evergreen State College product’s performance lifted Narrows from fifth place to third place in the standings and now the first year club can clinch a playoff spot with a win against the Snohomish Skyhawks at home on Saturday. It was the first shutout since January 24th, 2015 when Aaron Anderson and the Tacoma Stars blanked the Wenatchee Fire 5-0. This is Salveson’s second Player Of The Week award. He earned the award last January with an 8-6 win, again over the Artesians.

Tacoma Stars Reserves captain Micah Wenzel already has a WISL Defensive Player Of The Week award this season and now can add an Offensive Player Of The Week award to his resume with a hat trick in their 10-5 win on the road against the Oly-Pen Force. Wenzel, who was named WSASA Male Athlete Of The Year in 2018, also added two assists and continued his impressive defensive play with six blocks. Wenzel’s performance in another Stars Reserves win moves them to 8-0-0, three points ahead of Bellingham United, setting up a heavyweight match-up this weekend against the Hammers in a game that will likely determine first place in the regular season and home field advantage through the playoffs.

There was just one other nominee for Defensive POTW this week. Noe Betancourt-Cruz scored once and chipped in an assist from the back line as Bellingham United allowed just two goals to the Snohomish Skyhawks. Bellingham’s Ivan Colin and Uriel Herrera also earned Offensive POTW nominations thanks to their two goals games. JC Henson also scored twice and added an assist in Narrows FC’s shutout.